A simple experiment on birdsfoot trefoil

I often carry in my truck a spray bottle of herbicide that is 20% garlon 4 in mineral oil, a basal bark herbicide.  I use this on various brush I see during the summer.  Last year, while cruising for weeds,  I found a few dozen herbaceous invasive plants, birdsfoot trefoil (Lotus corniculatus).  Ordinarily I would spray them with a water based foliar herbicide, perhaps Garlon 3A or Crossbow.  But I did not have those with me.  I just had the basal bark mix.

I know if I sprayed the foliage of the plant with the basal bark mix it would kill it.  But that would be an expensive treatment.  But, what if I just sprayed a small spot, an inch or two wide, at the base of these big sprawling plants?  Would that kill them or just brown them out and leave the root alive?  How would I know if the plant roots died?

I came up with a simple experiment.

Below is my sprayer with basal bark mix and a Lotus plant flagged with blue tape.

Below is a big Lotus plant which I have just sprayed a small circle in the middle of the plant where the stems go to earth.    A complass plant leaf is at bottom.

Below is another Lotus a few days after spraying basal bark in the center.  In this specimen I gathered the stems up to find that center and then applied a small amount of basal bark mix close to the earth.  You can see the plant wilted.  Is it dead?  Note the aluminum tag I applied to a twisted end of wire that that is about 15 inches high.   How will I know I killed the root?  When I return a year later, find this tag, and find no living Lotus there.  The tag is prairie fire proof.

Below is one dead Lotus the next summer.  Therefore, the basal bark mix killed the root.

I tagged about 40 Lotus plants this way but since Covid cancelled our fire season I could only find 10 marked plants in all that un-burned foliage.  But ten out of ten Lotus, birdsfoot trefoil, were dead. 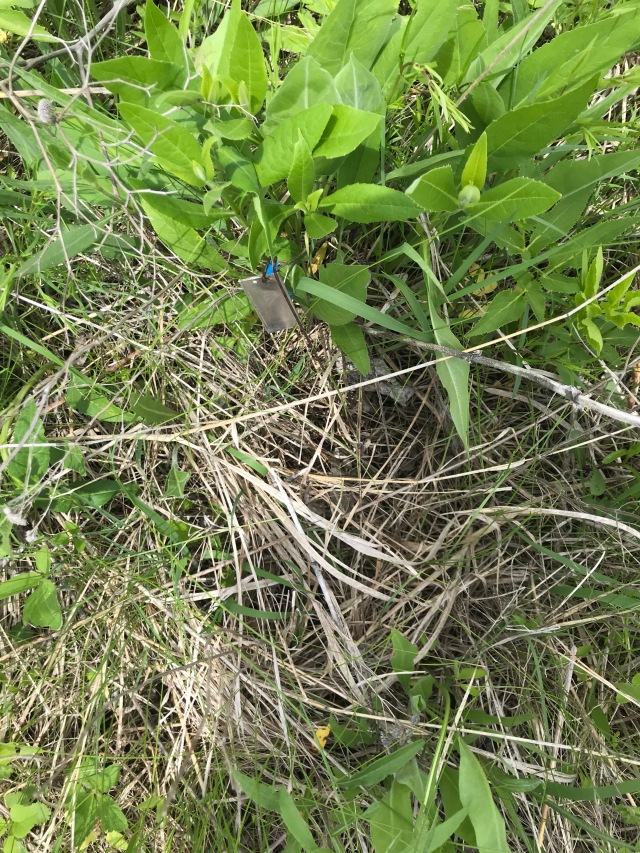 These casual small scale experiments are fun to do.  They give me comfort knowing my techniques are working.  They are not large scale enough to publish in a journal, but these experiments help me make a pitch to University researchers to do similar studies at scale with a control.

I should have used taller wires so I could find them all.  I only found one in four tags.

It is subtle, but I think I see a few inches of sparse vegetation around where the Lotus was.  Is that the Garlon 4 vaporizing and killing plants nearby?  Or had the competition of the large Lotus plants thinned nearby plants?  If I had burned the site I could have had a clearer view of the situation.

What if I repeated that experiment using concentrated glyphosate herbicide on just a center spot?

Other questions on foliar spraying come to mind:

What if I sprayed with water based broadleaf herbicide, but only sprayed the middle half of the plant?  Is that enough to kill it?  What about a quarter of the plant?

What if set up a series of tests of various broadleaf herbicides to see which had the best control of Lotus, but also the least off target damage?

Kudos to Mary Vieregg.  The prairie planting where I did this experiment was created in 2008 by volunteer steward, Mary Vieregg.  She and husband Jim picked and planted all the seed, and weeded if for years after.

The Vieregg planting at Clear Creek Knolls of Nachusa Grasslands.

4 Responses to A simple experiment on birdsfoot trefoil