Years back we purchased a tract with a gravel mine pit.  We found some funds last year to use an excavator to return the land to a more natural looking, gentle, shape before starting the long process of restoring the native plant community.

The photo below is the old gravel “borrow” pit.  The trees are mostly elm, some Osage orange, cherry.  The spoils are bigger and more abundant than my photo suggests.  The area surrounding the pit is a rather nice oak hickory woods.

The same pit, but a different photo angle.  Decades back the top soil had been pushed up onto a ridge on the left.  We later spread this topsoil back over the final grade.

After two days the contractors had the trees piled and burned.  The excavation contractors were Bill and Brad Nordman, below. 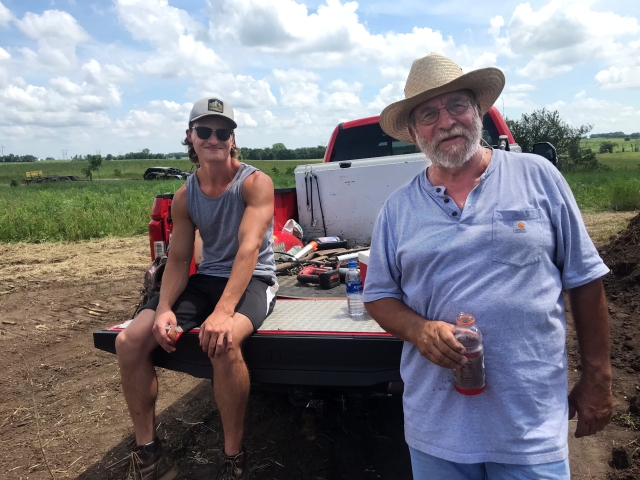 They gave the shape of the pit a more natural look.

We smoothed the area with a harrow and planted combine harvested seed from a prairie planting.

Below is the natural “cover crop” of foxtail, a weed in every foot of disturbed soil in the region.  There are also some smaller sized annual oats we planted in case our cover crop did not show up. And we planted our prairie seed. A year later the Canada rye dominates, and by year three the other prairie plants will be showing up

Below is a view of the restoration a year later.

This entry was posted in Uncategorized and tagged Bill Kleiman, pit restoration. Bookmark the permalink.